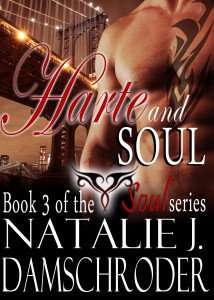 Have you ever been in the middle of a really good book and, eager to know if the next one is available (or when the next one will be out, or if there even is a next one) and gone to the author’s website to find out only to discover that the author hasn’t updated her site in a year and is still announcing the release of the book you’re in the middle of reading?

Yeah, I hate that.

And yet, I’m kind of one of them! And I apologize wholeheartedly. This post is to bring you up to date on what’s going on so you won’t be frustrated.

First and most importantly! I’ve had a few inquiries about Harte and Soul. I really did not intend for it to take so long to get this book written and published. But 2013 was fanatastically packed, and I spent all my time working with my editors to get four other books published. And then I was burned out.

I bet you hate it when authors say that, too.

But it’s true. We only have so much creative energy, and the stress of back-to-back deadlines sucks it dry pretty quickly. And then I had a surge of freelance work that took all my time once the deadlines were over, which made it hard to get back to writing. (You can help cure that problem. I won’t have to do so much freelance work if more people buy my novels! 🙂 )

But I’m very happy to say that I’m actively working on Harte and Soul and while I don’t have a release date to give you, it should be sooner rather than later. You can sign up for my newsletter if you want to be sure you know when it’s released. I promise, I only send newsletters when I have Really Big News. So, way less than once a month. 🙂

Harte and Soul‘s hero is Peter Ranger, who featured prominently in the first book, Soul of the Dragon. Peter is all grown up now and living his dreams. Kind of. He has the company he wanted, but now he’s a widower with a young daughter who can talk to animals. Her abilities may be bigger than that, so Alexa calls in Brooklyne Harte, who works for ARPEP, the Agency for the Registration and Protection of Extraordinary People. It’s her job to find out if people like Kiena have abilities that can be useful or put them at risk. ARPEP got a big boost after the Pike Laurent situation in Soulflight and has been busy helping people like Celebrity Reuhl (one of the abductees). But Alexa insists on Brook being undercover, and Brook hates lies and secrets. So there isn’t a great foundation for a relationship between her and Peter, especially when they discover that Kiena’s abilities are absolutely huge, and so is the threat against her.

Watch this space over the next few weeks. I might be inclined to post short excerpts to whet your appetite. 🙂 New to the Soul Series? Start with Soul of the Dragon. Already read it as well as Soulflight? If you liked those, you’ll probably enjoy my Goddesses Rising trilogy. They’re very much the same kinds of books—adventurous and romantic with hot snarky heroes and very strong women.

Okay, what else is going on? I have a six-title series of novellas that I hope to start releasing later this year. I will write them all first, I promise, so there won’t be a long wait to worry about. They’re contemporary romances (no paranormal or suspense elements) with a fun central premise. This series will give me a way to explore some stories I’ve been dying to write but that might not be sufficient for full-length novels.

I also have some backlist titles I’ll be refreshing and re-releasing. Those will be well marked as such, so you won’t be fooled into getting something you’ve already read.

OH! Yeah, I almost forgot. The third book of my Carina Press romantic adventures, Acceptable Risks, will be out in mass market paperback in June. Check out the book page for links. I’ll be hosting some Goodreads giveaways of all three paperbacks (signed copies, of course!) off and on for the rest of the year, so keep an eye out for those, too.

Okay, that should do it! Please don’t hesitate to contact me if you’d like to chat about any of my books. Find me on Facebook and Twitter if you’re a social type. I love getting new reviews, especially for books that have been out for a while, so thank you if you’re inclined to post reviews (even if you don’t like the book!). And if you’re the kind of reader who just likes to sink into a book and pretend nothing else exists, that’s a-okay! I thank you most of all. 🙂