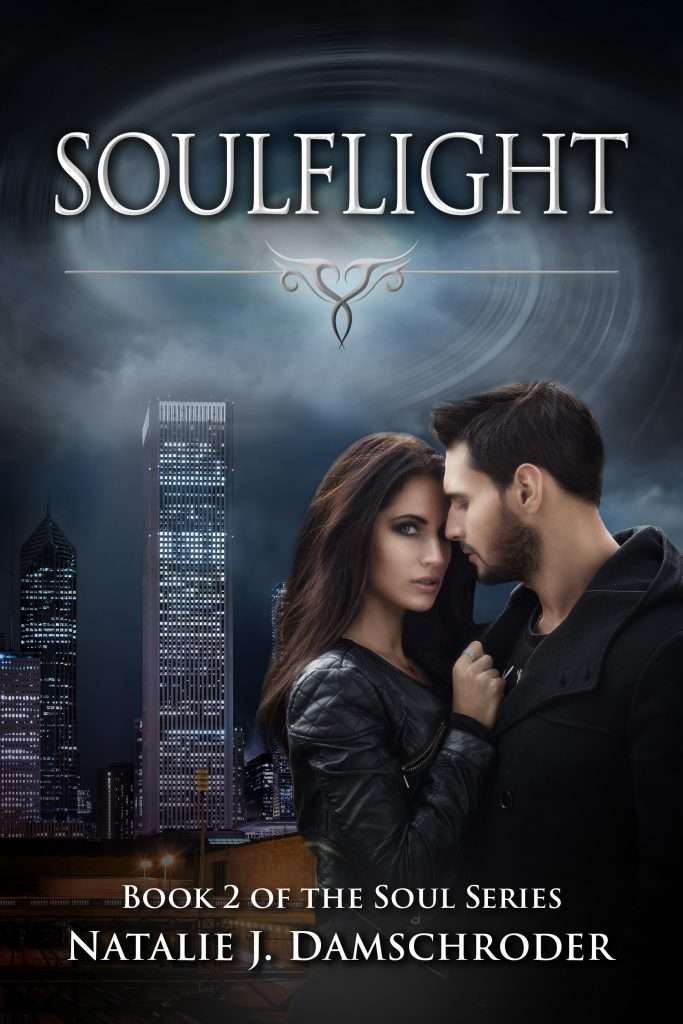 Book 2 of The Soul Series

Samantha Ranger can fly. Thirteen years ago someone shot her because of it, and threatened her family. She ran. Now, in saving the life of a child, she’s given them the ability to find her again.

Rock Davis, a freelance spy and friend of Samantha’s cousin Alexa, is sent to protect her. But when he learns who wants her, and why, his mission is compromised by his desire to use her to save his sister and stop one man and his dangerous delusions. It  doesn’t take long for Samantha to find her own place in his heart, making hard choices nearly impossible.

Samantha can overcome her fear of the man who wants to imprison her in order to help save the others under his control. But falling for Rock complicates everything—how far is he willing to go to right the wrongs he perceives in his past?

Bright lights, emerald-green fields, jolly fans, and baseball. Samantha Ranger sat in her seat behind home plate, inhaled the scent of peanuts and beer, and decided that tonight, at least, she was going to just let go and enjoy herself. For maybe the first time in thirteen years, she was going to have undiluted fun.

Her nearly three-year-old godson bellowed the song behind her, and Samantha turned to grin at him. Zachary kicked his feet as he stared around, singing almost absently. It was his first time at Jacobs Field.

The Cleveland Indians mascot had run onto the field to rev up the crowd. Zack’s father, Jason, leaned forward so his head was between Samantha’s and his wife’s.

“Sorry about the seats,” he said. “This was the best I could get.”

“Whaddya talkin’ about?” Samantha held her hands out toward the field. “We’re right behind home plate!” She gestured to the roof above, then to the chain link fence at the top of the stands three rows behind them. “We’ve got shelter in case it rains, and a nice breeze off Lake Erie. It’s perfect.”

They all stood, and Samantha scooped up Zachary when he whined that he couldn’t see. He solemnly placed his hand over his heart and hummed while a local high school student crooned the anthem. A moment later, he nearly burst her eardrum as he cheered with the crowd.

“Play ball!” he echoed the umpire on the field, and the game began.

The Indians were down by two in the fourth inning when Jason left to take Zack to the bathroom and get refreshments. Samantha noticed a guy across the aisle watching them as they went down the stairs. He wore an Indians T-shirt and held a beer just like any other spectator, but the intensity in his gaze was odd. He looked familiar to her, too, but she couldn’t figure out why. Was it one of Them?

She laughed at her imagination. He was just as likely to be from America’s Most Wanted. She watched the show and browsed the website daily, still illogically searching all these years later for the men who had shot her.

“It’s okay, Sam.” Ellie easily read her mood shift. “It’s been ages and nothing has happened. You’re as safe here as you are in your library.”

Samantha murmured her agreement but wasn’t sure either place fit that description. Or that any place ever would.

It helped, though, to have friends who knew her, people who helped her deal with her fears. Who sometimes even made her forget why she’d run.

Jason and Zack were coming back up the stairs, Zack urging his father on by bobbing his head and shoulders. He clutched a soda cup between his hands and sported a new Chief Wahoo ball cap.

“Mommy! Aunt Sammie! Looka my hat!” He lifted his hand to touch the brim just as Jason began to set him down. His little elbow bumped the carrier of drinks in Jason’s hand. Two cups tipped, sending soda cascading down Ellie’s back.

She shrieked and leapt to her feet. Jason grabbed a wad of napkins and swiped at her neck and shoulders, while Samantha pulled Ellie’s shirt out of her waistband to let ice out the bottom.

“Ohhhhh, that’s cold!” Ellie wrung her hands and bounced, helpless to do anything except stand there while her friend and husband tried to clean her up. A nice couple in front of them offered more napkins, and Sam cleaned off Ellie’s seat.

“Thank you.” Ellie sat back down, huffing out a breath.

“Honey, I’m so sorry. Really. Zack hit my hand—” Jason broke off and looked around. “Zack! Where did he go?”

Samantha’s heart jammed her throat and she whipped her head around. No adorable blond toddler with a new red hat. She looked down the almost empty row in the other direction. Nothing except fans roaring at a hit or catch or something unimportant. God, no. Not Zack. Her godson was so tiny.

“He was probably scared when you shrieked,” Sam told Ellie, who’d started to cry. Her gaze jerked around to the stands, the stairs, under the seats. “He’s a little guy. He could be hiding right under our noses.”

“Zack!” Jason yelled. Panic made his voice shake. “Come on, son. We’re not mad at you.”

“Look, there’s a security officer.” Samantha pointed and nudged Ellie’s shoulder. “Go get him to help us look. I’ll check—”

She stopped, arrested by an empty seat across the aisle. The guy she’d noticed earlier was gone. Tingles of premonition swept over her. Her stomach clutched.

“Shit, no.” She grabbed her binoculars and trained them on the lower stairs, the concourse, then each gate. “Come on, where are you?” She should have listened to her instincts. Should have paid more attention. She knew there was something wrong with the way that guy had looked at Zack.

There. She focused the glasses on a figure on the far side of the field, near the main gate. A guy in a white T-shirt, carrying a child with a red hat. Zack.

“Ellie, get security. Hurry.” She was vaguely aware of her friend scrambling down the stairs. Jason stood behind her, gripping her shoulder and saying, “What? What?” over and over again. Sam struggled to keep the binoculars trained on the kidnapper. He glanced over his shoulder and she caught her breath. The different perspective the binoculars gave her triggered her memory. She knew who he was. She had seen him on America’s Most Wanted. He was wanted in three states for child pornography and sexual abuse.

“Where is security?” she demanded.

“They’re trying to come up the stairs against traffic,” Jason explained. “Do you see him?”

“Yeah.” Too near the gate. And there was no security staff near him, so even if she could get the guy to radio his colleagues, they’d be too late.

I can’t let him take Zack.

She handed the binoculars to Jason. “Down there, by the gate. Send security to that spot. I’ll meet them there.”

Shock exploded in Jason’s eyes. “No, Sam, don’t! Security can—”

She ignored him. There wasn’t time to argue. She stepped up on her seat to avoid kicking the nice napkin people in front of her, took a deep breath—please, let me still be able to do it—and jumped.