The Second Sentence is Available for Preorder! 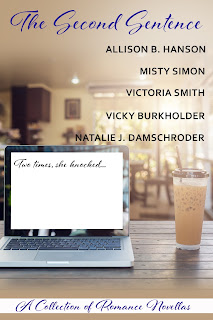 As you may recall, last year I embarked on a new venture with four other authors. Misty Simon, Vicky Burkholder, Victoria Smith, Allison B. Hanson, and I all started with the same first sentence to write five independent stories.

It was really cool to see that while we wrote wildly different types of stories—from college students to married couples to space pilots—there were some overlapping themes and concepts. And of course, because they’re all romances, they all end happily.

We loved it. So we made it A Thing. And on February 14, The Second Sentence will be released, and all five stories have the same SECOND (duh LOL) sentence. Later this year, we’ll have The Third Sentence, and so on.

Here’s the best part: Net proceeds will be donated to organizations dedicated to helping women in need, like Mary’s Shelter in Reading, PA.

If you go to our anthology website, you can learn more about Mary’s Shelter and even suggest additional organizations to benefit from the sale of these anthologies.

You can get The First Sentence here, if you don’t already have it, and pre-order The Second Sentence here. (We can’t do a preorder for Amazon, so keep an eye out for that release directly on February 14.)

Here’s more about the stories in The Second Sentence:

The premise: That if 5 authors start with the same sentence, they will all write vastly different stories. The results: A series! After the success of The First Sentence, we upped the degree of difficulty. These romantic novellas run the gamut of genres but all are inspired by the same SECOND sentence.

Catch of a Lifetime by Vicky Burkholder
Maren spent her year above the waves searching for a mate before her father marries her off to a stranger. Then she meets the one. When Kai meets Maren, the water around them sparkles with magic. Then he finds out who she is. With family honor at stake, can they trust their love to the fates?

Sing to My Soul by Allison B. Hanson
Ariah Bentley’s life is all about music, so of course she’s fallen for a musician. In the past, the guys she’s dated have pretended to be into her just to gain access to her record-producer father. She’s certain Jackson Slater is different. Not only has he asked her to move in with him, but she never told him who her father was. But could he still be using her to get to the top?

Written in the Cards by Misty Simon
Lydia’s broken heart does not need to be at a Ren Faire, but her friend Penelope insists. Codpieces and men in tights shouldn’t do it for her, but when she meets a tarot card reader who seems to see right into her soul, she might just have to rethink this romance thing and see what the future holds.

In the Heart of Chaos by Victoria Smith
When the residents of her small town begin exhibiting zombie-like symptoms, Mari will do whatever is necessary to survive. She meets up with Jason, the boy-now-man she has loved forever, and they work together to help their community survive. Along the way, they discover the feelings that had always simmered under the surface are real.

The Tempest Turtle by Natalie J. Damschroder
Using time travel to right wrongs has filled Amaya and Brody’s lives for 12 years. But when they learn what The Charge, their employer, is really doing with the power they’ve tapped, everything changes. Their purpose. Their choices. And their feelings for each other.