Due to technical difficulties, I don’t have a website up yet for NJ Damschroder, who is about to publish the first in her YA series. I”m also awaiting final cover art, so the book isn’t published yet. But it will be ANY DAY NOW. And I’m super excited!

UPDATE: The website is now up, and the cover is here! The book should be on sale in the next couple of days, if not sooner!

So here is a sneak peek at Full Fusion! 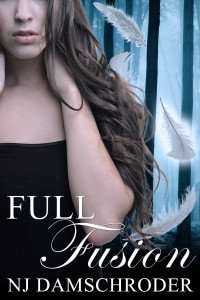 Idiot. It’s like one of those crocotta things from that supernatural show, luring you away so it can eat you. I ignored myself, too. I had to know what that light was. It was the answer to everything. A hard core of anticipation formed in the center of my body, and I moved faster, more purposefully. I wanted that light. I had to have it, like a jilted co-ed has to have ice cream. If I didn’t get it, I would die. Lincoln called my name from very far away. He was scared. I wanted to tell him it was okay, but my voice didn’t work. My eyes burned, dry, but I couldn’t blink my eyelids.

Then something hit me, hard, but rolled in midair so I landed on it instead of the blacktop. Before we landed, that light, the same but different, streaked over my head, missing me by inches.

Lincoln had tackled me better than the Patriots’ star safety could have. He rolled again so he covered me as the world lit up—red, gold, black—and roared. The ground shook under me, the sky wiggled above, and my ears had been stuffed with cotton. Everything slowed, got sluggish, but my brain processed what was happening. I had a direct line of sight under Linc’s arm, to the blazing ball of fire that had been his Firebird.

My lungs managed to suck in the air Linc had knocked out of them, and with air came chaos. From shoulders to ankles, I hurt from the impact of his tackle. My eardrums cringed from the noise, which, if I concentrated, I could tell was a mix of roaring fire, sirens, and screams/shouts, probably from people who’d been in the pro shop or Hall. My eyes felt seared by the light that had zoomed past, not nearly so seductive and friendly as it had seemed at first.

Eighteen-year-old Roxie Sebastian lives a charmed life, and she knows it. Too bad she can’t feel it. All her life, she’s felt disconnected from the world around her. Everything changes just before graduation, when she’s drawn to an eerie, brilliant light—which narrowly misses her as it blows up her friend Lincoln’s car. Clearly someone’s after Roxie, and finally Lincoln tells her the truth: He and Roxie are angels, beings from another dimension, and that light is her soul, separated from her human body in a traumatic birth.

Once a skeptical Roxie rules out the other possibilities—like Lincoln created this delusion to escape his abusive father—she accepts her gut-deep knowledge of the truth. But someone has been screwing with her light, using it to commit crimes, and their actions are about to cause irreparable damage to two worlds: the one she lives in, and the one she can’t remember.

Aided by her best friend Jordan, her boyfriend Tucker, and Lincoln, Roxie tracks down the criminal and uncovers many more secrets not only of her past, but of the history of their race on Earth. And then Roxie faces a horrible dilemma—the only way she can stop them from ripping apart both worlds is to fuse with her light…which could be tainted by the evil with which it was used.