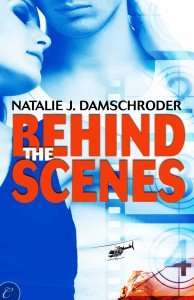 Kennedy Smyth’s firm provides security for companies and charities in seriously dangerous countries. She doesn’t usually take on “frivolous” jobs, but when an old friend asks her to protect his son’s movie shoot, she finds it hard to refuse. Also hard to resist is the film’s charismatic star, Rogan St. James. The handsome actor piques her interest, while the strange actions of the terrorist threatening the set raise her suspicions.

Even though he’s a successful actor, Rogan wants more—a real woman to love, the type he doesn’t think exists…until he meets Kennedy. She intrigues him with her confidence and passion for her work, and frustrates him with her refusal to let him get close.

But Kennedy finds herself in a vulnerable position when she discovers that the terrorist isn’t actually out to derail the film. She’s the real target—and if he finds out how much Rogan means to her, he could be next…

Buy Now (or click the preferred store link below)

“Overall, I enjoyed this suspenseful and well-written tale. The plot has twists that I never saw coming, and the interaction between Kennedy and Rogan had me rooting for this couple the whole way. If you enjoy an edge-of-your-seat romantic suspense story, then don’t hesitate to get a copy of Behind the Scenes and allow yourself to get swept into this fantastic novel.”—4 books by Sunflower at Long and Short Reviews

“I liked the overall premise and the setting of the story. A female heading an exclusive security firm is a novel concept and the constant danger and action that is seamlessly integrated into the story makes for a compelling read. Though I felt that the romance aspect of the novel didn’t get an equal amount of attention as the suspense part, Behind the Scenes still managed to keep me turning the pages.”—Maldivian Book Reviewer’s Realm of Romance

“My hat, were I wearing one, would also be doffed for Damschroder for doing such a remarkably superb job creating and executing such an intensely complex security job. With seemingly effortless aplomb, she manipulated and wove together the myriad pieces of characters, setting, and suspense, and produced one of the most detail-oriented and believable scenarios of a realistic security detail that I’ve read in romantic suspense. Ever.”—One Good Book Deserves Another